Emboldened by my good luck I started exploring by hitching along Sunset Boulevard through Beverly Hills to Hollywood. This was already pretty crazy, since this was a big dangerous city and I never saw anyone else hitching in LA. I think I got lifts because people couldn’t believe their eyes and also I looked pretty harmless. LA is a car city and very hard to walk around since pavements, that is sidewalks, can just disappear into dead ends, and quite often there is no sidewalk at all. It is unwise to cross wide fast roads except at a junction, and sometimes there is no junction, just a flyover and the cars never stop. Still at my starting point on West Sunset the road was manageable with lots of turnoffs and it took me straight to where I wanted to go, and so became a regular route. Like most people in the cars I was heading to Hollywood and I rarely ventured out of this northern section of LA, and so avoided the freeways full of flyovers. In the interests of full disclosure I should reveal I occasionally took the bus, but most of the time I couldn’t work out where they were going, so I ended up hitching.

Sunset Boulevard leads straight to the Sunset Strip and of course I had heard of that from the early sixties TV show, 77 Sunset Strip. The buildings in this area have a low slung quality, since right behind the Strip the land veers sharply up into the Hollywood Hills, full of steep windy dead-end roads and then Laurel Canyon. It is a border zone, with lush hills as a backdrop. Along the Strip are several famous clubs such as the Whisky a Go Go and the Roxy, not forgetting the notorious Hyatt Hotel. I had no guide book while in the US and went to most places through vague cultural associations in records, books, movies ,TV and the New Musical Express. Not the best way to travel, but it worked out fine. First stop was the biggest record shop I had ever seen, Tower Records, one huge flatpack building with vinyl record racks stretching into the distance. This record store has gone down in rock history as the most famous ever ‘cos the stars themselves shopped there, but I couldn’t carry any records now. Outside the store there were huge billboards glowering over the highway featuring the current music stars such as the Stones and Rod Stewart, so much for the counterculture I thought, here it’s all mainstream. Someone must be earning a lot of money. 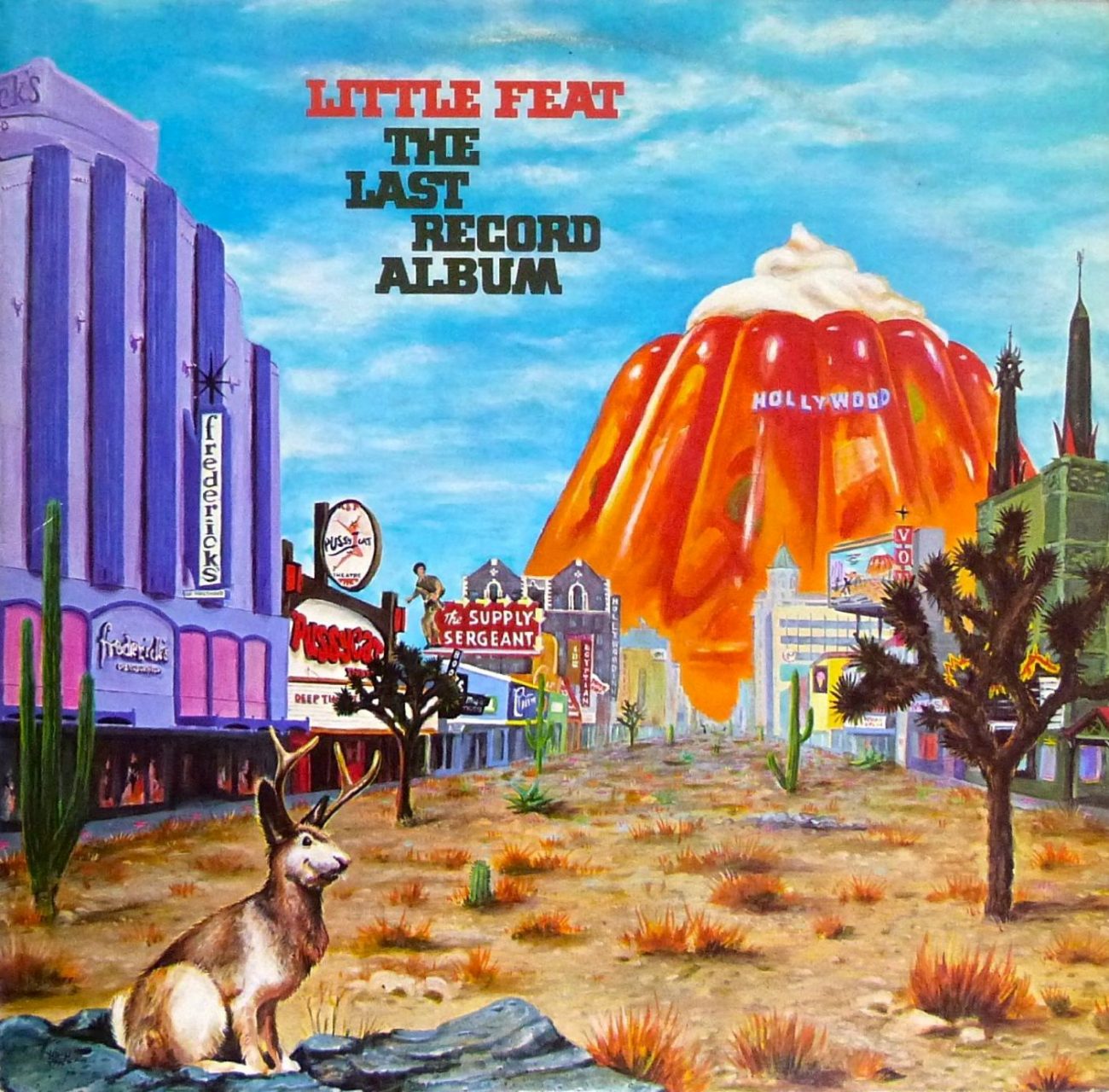 Headed off Sunset to Hollywood Boulevard, to the heart of it or so I had thought. The entrance was some fabulously garish Tattoo parlours with beautiful neon shining through the haze, then various anonymous dusty shopfronts illuminated by the liquor stores, adult theatres and pick-up joints. There was no-one there except junkies, tramps and a few shady people walking quickly. It did not appear to be a shopping day. In the diary my feelings are well summed up by the cover of Little Feat’s The Last Record Album. The portrayal of Hollywood Boulevard is slightly over-romanticised in my opinion.

There was another song in my head and because of its faded glamour in this street of seediness it did not disappoint. Grauman’s Chinese Theatre was built in1926 and outside it are concrete blocks which bear the signatures, footprints, and handprints of movie stars from the 1920s to the present day. The magic of these stars still resonated with me, I had grown up watching their movies and I felt I knew them, such is the power of the star-making machine. Never happier than when I could kneel by Marilyn’s handprint wearing my own Marilyn T shirt. I imagined her giggling right there as she impregnated the wet concrete. She felt closer. My other favourite was The Marx Brothers, whose classic films such as Monkey Business and Duck Soup had a level of craziness which never failed to make me laugh. I had read books about these stars, they were real and the proof was in front of me. Today the theatre no longer looks grey, but right then it seemed appropriate for these bygone stars of the silver screen. The rock stars shone a lot brighter at the time.

I continued down the historic Hollywood Walk of Fame, which are the 5 pointed stars set into the sidewalk, and failed to recognise a lot of the names. As I headed to the junction of Hollywood and Vine it was the song Celluloid Heroes that played back in my head. I had seen the Kinks perform this at The Stadium in Liverpool, and they’d been great.

You can see all the stars as you walk down Hollywood Boulevard
Some that you recognise, some that you’ve hardly even heard of
People who worked and suffered and struggled for fame
Some who succeeded and some who suffered in vain

I was on my way to the Huntington Hartford Theatre (now called the Ricardo Montalbán Theatre) to see Equus by Peter Shaffer, featuring Brian Bedford (who I had seen in the 70mm Cinerama Grand Prix movie) and Dai Bradley, the star of Ken Loach’s Kes. Whether Mr West had recommended this or I just happened upon it I can’t remember, but I dutifully queued up for a cheap matinee ticket. I thought I had missed my chance when I was led away through a small side door, but it went straight onto the stage. They were doing the show in the round, despite being a traditional proscenium arch theatre, and I had a ringside seat. I looked out over the audience and could smell the actors. We were treated to visceral and powerful performances in a heart-rending psychological drama involving the blinding of horses. The horses were movingly portrayed using large skeletal iron masks. Dai Bradley played his role to the limit, stripped bare both literally and metaphorically, and I couldn’t believe he would be capable of another performance in the evening. This experience gave me a renewed respect for the power of theatre, and it would inspire me later when I joined a Drama Society and started acting.

I hitched home and got a lift from a rock promoter, which no doubt impressed me, but we didn’t get on too well since I didn’t know the local bands he was excited about. Everyone in LA was well into name dropping, and it appeared to be enough to have been in the same room, store or bar and you were then on first name terms with them, you had shared experiences. I met several delivery men and pool cleaners whose introductory story was the stars they had met or serviced. This was a star system city. I soon realised it was best to be impressed, even though I didn’t know who they were talking about.

When asked I never said I was from Southport since no-one had heard of it and even most Brits though it was somewhere on the South Coast. So I said I was from Liverpool, everyone knew that city, and immediately the subject of The Beatles arose. I had been too young to see them, but their records and movies had been a defining and constant inspiration as I grew up. I had seen Paul McCartney & Wings at the Liverpool Empire in 1973, but it it had been like a gig for parents, totally lacking in ROCK, and I also discovered Linda couldn’t sing. Henry McCullough, his guitarist, strummed a few chords of Yesterday and Paul looked daggers at him. He did not play Beatles numbers in those days.

At the time in LA there were rumours that they were about to reform for a one-off show worth millions of dollars, and I would be asked to pontificate on the inevitable reunion, since only a fool would turn down that kind of money. When I said a reunion was unlikely this was not well received, so I had to placate them with a bit of scouse banter and then do my Ringo impression, which did always go down well. I apologised several times for not personally knowing The Beatles.