I awoke to shouting. Who on earth is shouting I thought, there’s nobody here. Finally I stirred myself and exited my bright orange tent to find I was the subject of the commotion. I had camped in someone’s garden, it was a very big garden and there 50 yards away was someone bellowing what the hell was I doing there, this is private property and to clear off right now. I yelled back I would be doing just that, it wasn’t the situation for an explanation. I cleared off as quickly as I could, tail between my legs, studiously avoiding the distant house.

Out here, around the top of Lake Superior, I was still on the Trans-Canada, now called Highway 17. Anything less like a highway is hard to imagine, this was a rural backwater 2-lane road and most importantly there actually was nobody there. I couldn’t believe that the main road across Canada was empty, but I have the photo to prove it. Lifts became very hard to come by and they were all locals, not going far. Still, time enough to finish Proust as I wait for a car to roll by. A middle-aged chatty guy picks me up and as we are listening to the radio a song called Afternoon Delight by the Starlight Vocal Band comes on, it’s a schmaltzy catchy pop song and the female chorus goes like this:

Half way through the song he starts guffawing, turning to me saying You know what’s happening, right? Oh yep, I answer. Becoming animated he tells me that all these new pop songs are packed full of innuendo if not actual sex. He seems particularly pleased women are now singing them, as if they have just discovered their own sexuality. I thought to myself have you been living under a rock, this is not a new thing. Yes, he continues, all these women are at it now, it’s gonna be great, don’t ya think? I wasn’t sure whether he meant there was a golden age of sexy pop music starting or that there was a sexual revolution in progress. Either way, I just agreed with him, thinking of Willie Dixon’s 1954 classic I Just Want to Make Love to You, sung by Etta James in 1961, or maybe even worse Je T’aime by Jane Birkin and Serge Gainsbourg in 1968. Thought it wise not to start a pop history lesson, so mentioned the 1975 hit Lady Marmalade by Labelle (Voulez-vous coucher avec moi, ce soir), but he didn’t appear to have heard of it. We lived in different countries, I was just learning the good natured retro-conservatism of his.

Another short lift from a French engineer out of Montreal. I got a chance to practice some French, but he was happier speaking English, probably didn’t believe an English guy could speak French properly. He was staying at a motel by Jackfish Lake out past Terrace Bay and doing some fishing, and so I was dropped in the middle of nowhere, but at least it was picture postcard beautiful. Here you can also see my relaxed hitchhiking style as my rucksack, sporting the Union Jack, advertises that I am en route to the UK. Meanwhile I can sit on a rock and read my book. There weren’t any takers that day, so as dusk fell I spied out a path running towards the lake. 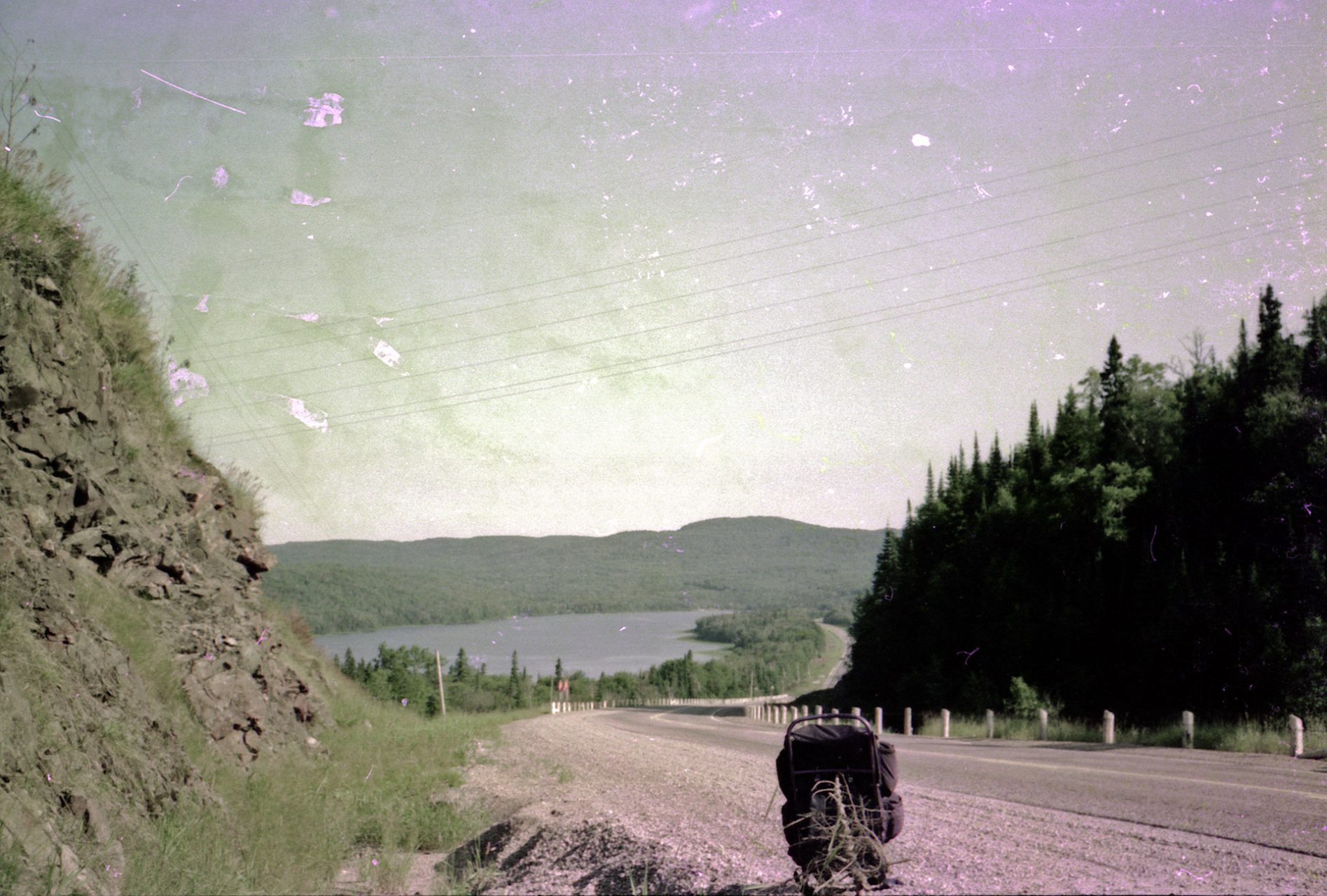 The moon came out as I wandered through the woods and a magical scene ensued. I was walking down a wide artificial firebreak towards the lake, the sky turned deep azure and the stars came out, my feet illuminated by the moonlight. I found a serene headland, the water gently lapping, a spectral mist enveloping me. I put up my tent knowing I would not be disturbed in this idyllic location, my dream of camping out was coming good. I recited some ill-remembered modernist French lyric poetry by Paul Valéry and Stéphane Mallarmé to honour the moment.

An hour later, wrapped up tight in my sleeping bag, I heard footsteps. Surely not, I must be dreaming them. My senses perked up, I could hear something moving slowly, round the tent. There was no flashlight, the sounds were irregular, it must be an animal, probably a deer. I didn’t move, just listened. There was rustling and scraping, but nothing touched my small tent. Slowly the sounds died away, and I thought well if someone’s stolen my rucksack, which was outside the tent, I would find out in the morning.