Arrived at JFK, buzzing but tired. Then lying through my teeth at immigration, reading the Drug Free America posters as I mumbled that some American friends in upstate New York were expecting me – a complete lie, ah if only it were true, I thought. I believe they checked the address, but thank heavens didn’t ring them.

The trip into New York from JFK on the bus to Penn Station in the heart of Manhattan was relaxing and educational. Queens was full of down at heel suburbs not too different from the outskirts of a rundown and faded British seaside resort. Crossing into Manhattan everything changed, got bigger and bigger until I was just a little speck, one of many, scrabbling to find my existence in this foreign place. The size of the buildings gave the feeling of being landed in a gulch someone had driven a motorway through, that now seemed submerged among these buildings. The shadows were dark and powerful, sunlight and glare in narrow lines, I was in a giant grid, a little lab rat dashing around aimlessly. I looked down the street, it was empty, then halfway across the road a giant line of yellow cabs, six abreast, was bearing down at speed – wow not ready for this gotta get outa here. Or maybe just cross at a junction. I’m not in Toytown. 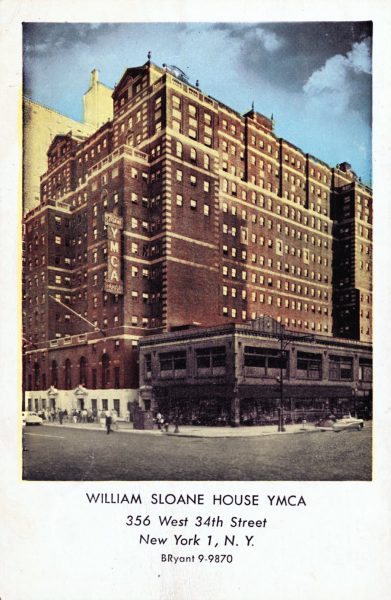 By more luck than judgement I ended up nearby at the Sloane House YMCA at 365 West 34th Street, an impressive if decrepit building. Wow, it had miles of corridors and 1,492 bedrooms, I was certainly in America. In my tiny room there were five locks and chains on the door, most bigger then any I had ever seen. This was an early sign of the American obsession with security and made me feel in danger. Everyone was bigger and stronger than me, and no doubt knew how the locks and the rest of the country worked. While staying there I had my first experience of afternoon American television. It was wonderful to have so many channels because back in the UK there were only three and then only in the evening. Of course the novelty was enjoyable, the ads and the commentators were in your face, it was all switched on. Choice is a wonderful thing, but like any novelty it soon wore off and the reality of 57 channels and nothing on (except ads) was soon to strike home. I was also outraged that the ads would occur at random, sometimes a few minutes before the program finished, there was simply no avoiding them. Meanwhile the atmosphere at the YMCA was intimidating, the showers were shared and, I soon realised, a big pickup place. I showered quickly, and then locked my door. Just why was everyone bigger and stronger than pale little me?

After a few calculations I realised I would soon be starving to death and I had no idea of where to look for a job. I went to the Council on International Educational Exchange (CIEE) and made a few enquiries which were not encouraging. I would be working illegally so finding a job would have to be done through word of mouth, that is going to places and asking for jobs. I had no idea where to start and if I stayed in the YMCA I would soon be penniless, even though it was cheap. I estimated I might last 2 or 3 weeks, but my return flight was in 10 weeks. On this trip every cent counted, but nevertheless I started to put my cents into the telephone and rang up some people I had never met, apparently living in luxury in Rhode Island, hoping they would save me. I had reckoned without the answerphone, a gadget yet to hit the UK, so I spent dollars phoning their answerphone and a few others before I realised that this was pointless and in any case they just weren’t there. I went to Times Square, a neon nightmare of panhandlers and tourists, wind up merchants and peep shows, and I was just another Joe Buck. Where do I start to look for a job here? New York was weighing down on me, I felt I must be in the wrong part of town to find work and I did not have the chutzpah to walk and talk it with prospective employers. In the margins of my diary I wrote “The only living boy in New York” and that was how I felt, the loneliness hit me and confused me, up the creek without a paddle.