At some point in the early morning hours we were picked by a young man in a sharp black Pontiac. Rock music was playing, I was slumped in the back, and pretty soon Billy was asked to open the glove compartment and prepare a line for our driver, to “keep him going”. Well we were fulfilling our part of the bargain by servicing the driver, but whatever was being taken was not shared (to my relief) and we got a good long ride. I did worry a little as the drugs kicked in and our driver became more verbose and it was made clear that my dozing off was not acceptable under the terms of our imagined agreement. During my trip the amount of drugs and alcohol consumed in automobiles would be quite staggering – what sensible people we were back in the UK. Or maybe you just meet a crazier class of person when hitchhiking at night. 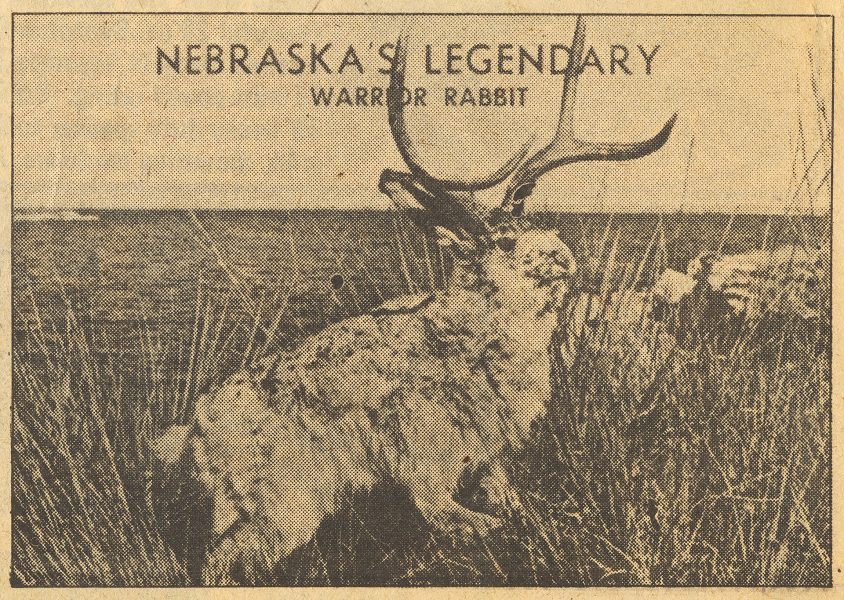 The boredom continued through Nebraska, nothing to see, nothing to do, it was dark of course. To commemorate my visit I later found a newspaper cutting of Nebraska’s legendary warrior rabbit, the most exciting non-existent thing I didn’t see there. Still we were making good if uninteresting progress and then as the sun rose we met up with a bunch of goofy kids driving a pick-up truck. Billy and me piled into the open back of the truck, beers appeared as if by magic and we started the long ascent to Denver and the Rocky Mountains. The storm was now miles away, the sun was shining through white fluffy clouds and the road wound through a lightly wooded valley, trees at last. The lack of comfort was easily overcome by the sheer exhilaration and a little alcohol. I had come through dark and mysterious nights of the soul, not knowing what I was getting into, blindly following my half crazy guide. By this time I thought I knew Billy well enough and he let me take his photo, it came out well. As the air rushed through my hair the tiredness evaporated and I felt like singing, but I didn’t. Denver appeared like a mirage, a row of glinting skyscrapers appearing out of a forest, with the magnificent backdrop of the Rocky Mountains. I couldn’t believe I was here, nearly two thirds of my way across America.

Despite a series of short rides the Rockies were magnificent in the evening light, I saw a buddhist retreat then huge peaks, glistening lakes, towns set in dramatic valleys, ski runs, I was in Switzerland all of a sudden. My excitement gave me a false sense of arrival – yes it was all going too well. The road, while spectacular, was tortured and so we made slow progress. The Rockies were bigger than I thought. There was no thought of stopping, in any case it would be too cold up here in the mountains, movement was all. We hadn’t arrived anywhere as it got dark and slowly the wait between lifts got longer as we got more impatient. There were no illuminated junctions out here, everyone was travelling locally, we were heading out to the boondocks, we were out of the way and there were deserts ahead. There was a shift in Billy’s demeanour, he could feel the rednecks closing in.

Around the midnight hour we ended up in the benighted town of Rifle, the other side of the Rockies. It was closed and everyone had gone to bed. A police car stopped by and we said we were just hitchhiking to California, some coded warnings and they left us. We were in the forecourt of a truck stop, but no trucks moved, you could hear the tumbleweed. A few people moving in the darkness gave us furtive glances. We found a few truck drivers who were heading to bed and asked about lifts – nothing doing but a few grunts. We were dumbass hippies. I asked Billy what to do and he lost it. We were in the country, people drawled, he didn’t understand them. As a New Yorker he was a target, they didn’t like those kinda people out here, he didn’t know why he was here. This is not a city, he didn’t belong here, it’s hicksville. This is what he had feared, we were in redneck country. We had to get out. He had to get home. I could hardly believe my ears, he was breaking the unspoken covenant. He also appeared to be having some geographical problems since we were certainly not down south in redneck country, just a provincial cattle town in Colorado. Luckily I thought about the fact that Billy had never left the Bronx before, that Billy appeared to be travelling in desperation rather than desire, that he was finally out of his depth. It appeared that fear had suddenly swept over him, for reasons I would never know. Maybe his problems back home had sorted themselves out in his head, so now this was over, there had been enough running. I tried to tell him we were nearly there, California was closer than New York, do the simple thing. He said he had enough money for the bus back to the Bronx. We had to hand ourselves in. We can sleep in a police cell. He was up for a fight, with anyone. I was exhausted and didn’t have the patience for this, so simply said I gotta go and sleep, and walked away. I would try and find him in the morning, for now this was all too much.

I walked out to the darkness on the edge of town, my eyes adjusted to the moonlight and I saw a field with a single lonely tree. Hoped there were no cows. I rolled out my sleeping bag under this tree and of course slept like a log.

Previous Day - Iowa : The Storm
Next Day - Salt Lake City : In a Beetle