I returned from this trip with a completely renewed sense of self-reliance, there was no challenge in life now beyond me and for a relatively quiet, shy person that was a big step forward. I had lived  with myself, in my own skin, and survived. Back at university I would find new friends and ambitions, and I joined the drama society. My acting was aided by the cornucopia of characters I had met, and Billy’s Bronx accent was used to good effect in my first major role as Arturo Ui. I felt I could understand anyone, I had already met them.

Looking back it is rather frightening to see how my interests and concerns of today are mirrored so precisely back then, how little I have changed. How had I assimilated all that knowledge by the age of 21? Already my obsessions were in place, they would never leave, they would only be shuffled around by the vagaries of life. I did not become a French teacher as intended, my life widened out along the roads less travelled, and eventually I wrote up this story as I once promised back in ’76.

My faith in people was reinforced, many strangers had been good to me. I had not been robbed, mugged or assaulted as many people believed I would be. Despite their generosity the American people did seem to live in a state of nebulous fear, perhaps due to their frontier mentality, perhaps due to the excessive violence portrayed in their movies, or more possibly the gun culture they have inherited. Are these people carrying guns because they fear attack by wild animals? No, unfortunately they now carry them because they fear other Americans.

It is probably the culture of fear which has been the demise of hitchhiking. It is no longer seen as culturally acceptable, just too dangerous and quixotic. Insurance won’t cover it, it is too random. Recently the biggest deterrent may simply be the availability of discount long distance fares, and most of us have more money in our pocket than we did in 1976. If you can easily get from London to Manchester for six quid, it makes hitching seem rather pointless. Of course hitching is not just about getting somewhere for free, it is an experience of submission, surprise and hope, an acceptance of chance.

Today we live in different times, the Thatcher and Reagan years killed off the counterculture, the poor have been removed to the margins, the rich have inherited the Earth or at least own all the property. Music has nothing to say, the selfie is now the subject of photography. Radicalism has been subsumed into the self-obsession of gender identity. Consumerism is the new spirituality, shopping is all we can hope for, exit through the gift shop people. The Greens may have persuaded us to recycle, yet the leviathan of human consumption has tripled since ’76, we have become heavier and more dangerous. In the age of the internet we can no longer be anonymous, we are tracked by CCTV, our phones, our social media; to participate we must all pay with our private data. Security alerts bombard us, religion is once again causing wars. The terrorists are amongst us, wreaking their pointless revenge, be forever vigilant. The walls which were tumbling are now being built again, just in different places. Nobody welcomes the poor huddled masses these days.

The initial title for this annotated diary was Spirit of ’76 in honour of the record by the sixties LA rock band Spirit. This dreamlike double album starts with America The Beautiful/The Times They Are A-Changin’ and continues in the same mould with semi-acoustic ethereal songs by Randy California interspersed with rock classics from Dylan, Hendrix and the Stones. Together they summon up a spacey, patchwork view of the States, with little psychedelic interludes and phased overheard conversations, acting like a comment on and requiem for the counterculture in the year of the bicentennial. I only heard this record on my return to the UK, but today it never fails to re-awaken those days hitching, like the soundtrack of an imagined David Lynch road movie unspooling in my head. 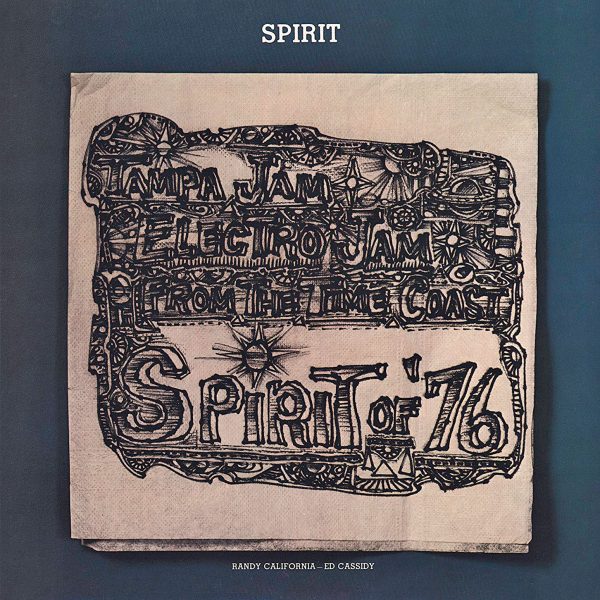