As a seasoned hitchhiker I knew what I must do – get on the road. My greatest ever hitchhike started in Manhattan on the entrance to Washington Bridge at a place where cars could hardly stop. I had no idea where I was going, I just knew that I couldn’t afford to stay at the YMCA. I soon realised, and should have known, that when someone picks you up and you don’t know where you’re going, things are not going to work out well. From parents and friends I had collected an address in Ottawa, one in Rhode Island, one in Arkansas and a few others, so I would go where the road took me. Unbelievable. The road takes you nowhere quickly unless you are travelling with desire. Little did I guess that my secret desires would be fulfilled and in five days I would be in California, in San Francisco. It’s barely believable even now.

After a few local lifts I was picked up by Ron, a smart and thoroughly decent guy with a little bow tie. After expressing amazement that I didn’t know where I was going, we discussed British politics, he expressed admiration for the Queen and took me out for fish and chips at Arthur Treacher’s on Interstate 80. Things were looking up, for me at least. At the time the US had an unelected President, Gerald Ford, after Nixon’s resignation over the Watergate scandal, while in the UK James Callaghan was struggling to lead a minority Labour government. We discussed the benefits of a parliamentary over a presidential system and our parliament was looking pretty good since the USA had just had to impeach their own President for lying and misleading the country. I kept my lip buttoned regarding my own views on Mr Callaghan and the monarchy, while also coming to realise how different the functioning of democracy was in the States. The respect shown by Ron to the UK and its history would be echoed by many other people I met on this journey, although we were often perceived through rose tinted glasses. Soon the liberal southern democrat Jimmy Carter would be elected in the States (which I’m sure pleased Ron), while in the UK we were heading for the winter of discontent and rubbish piled high in the streets. Another subject that arose from my lack of geographical knowledge was the fact that nearly every city and town in the UK has its namesake in America: just in little New Jersey there is a Birmingham, a Manchester, a Chester, a Southampton, a Stratford, never mind Bedminster. No wonder they showed us some respect, we were the founders. This was what the Bicentennial meant, independence from the UK was just two hundred years old, and it was due to be celebrated and honoured in this new country on the 4th of July. Our chat obviously went well, since I later received a postcard from Ron on holiday in Venice. Top hitchhiking! 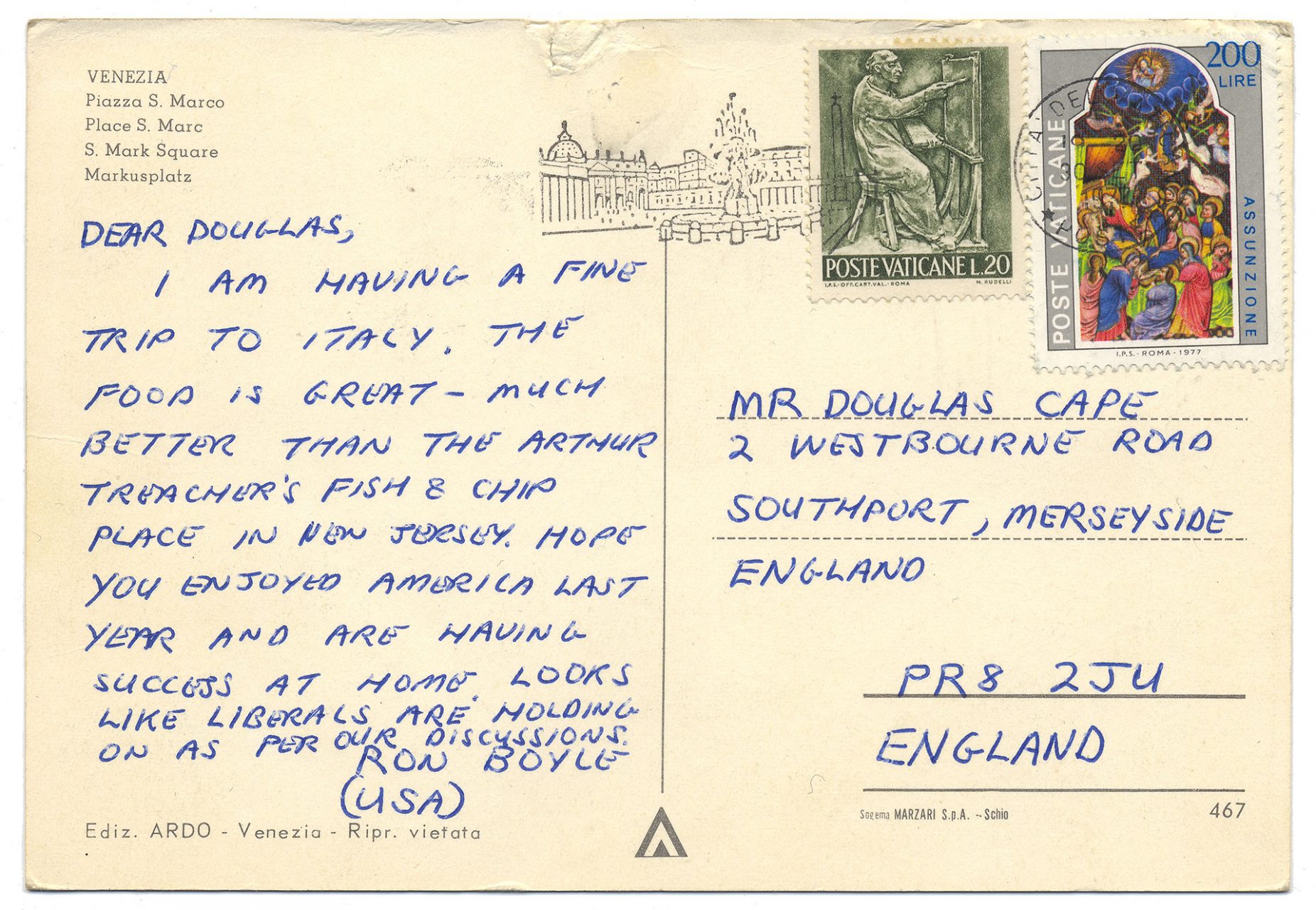 But then it got dark. There is a picture in my mind of standing at the roadside, the highway stretches away up a hill through dark green embankments, and in the distance is by far the biggest illuminated sign I have ever seen. There are no trees, no houses, the sky is clear and dark indigo. Streams of cars pour down the hill blending into a ribbon of light. The tones are those of an Edward Hopper painting, it is dusk, and the sign is that giant Exxon sign I had heard about. This is maybe what I had come for.

The midnight gang’s assembled
And picked a rendezvous for the night
They’ll meet ‘neath that giant Exxon sign
That brings this fair city light
Man, there’s an opera out on the Turnpike

And then, or just before then, I met Billy Smith on the road and things really took off. Billy was from the Bronx, a few years older than me, and worked in a garage. He was covered in tattoos, grease and muscle. I could hardly understand him, he was neanderthal. Even better, he was on his way to California to start a new life after unspecified misdemeanours back in the Bronx. Life was turning into a Bruce Springsteen song and that could only be good, as long as you ignored the tragic ending.

As the darkness drew in he told me he hitched at night. I didn’t believe him and thought it would be impossible. I hadn’t realised the huge distances Americans travel in their cars and that with a little help, they are indeed 24 hour people. That night I had my first American beer, must have been courtesy of the great Billy Smith.

Billy was the boss and I was the little helper good at getting lifts. Despite the lack of illumination on the highway, most junctions were lit and we got a series of lifts, some short hops, others for hours. I plied him for info and slowly he told me his rules of the road and how we would reach California. The rules were:

With Billy in control and my thumb out we made progress across Pennsylvania, picked up by a series of chancers, car show offs, lonely guys and other people on a mission. I would sit in the back, desperately trying to stay awake, as Billy explained we were both going to start a new life in California where the air was full of promise and the opportunities were beckoning, a land of milk and honey waiting to welcome us, like some prospectors of yore. Billy had had enough of being bossed about in a grungy garage, messed about by errant girlfriends, hemmed in by inner city poverty, he was now on his way to explore the riches of the new world where the sun always shone and the air was fresh. It slowly dawned on me that Billy had never left the Bronx before and was in some kind of psychic struggle with a rising tide of fantasy and paranoia. Still he was doing the job, had taken me in tow and I was grateful.