Barrel out over the Golden Gate to Marin County with Doug & Co., smoking copious amounts of dope while singing along with Peter Frampton and his huge hit album Frampton Comes Alive. Normally I would despise this faux rock music, but right here right now it was the best thing ever, summing up the communal bonhomie of California kids. It was one of the first live albums where you could really hear the audience cheer and sing along, even when Peter was using his guitar talk-box effect. Do You Feel Like I Do asks Peter – Yes, we are all wrecked! On the edge of Mill Valley we stopped for supplies at an enormous and empty supermarket. The place was a glowing cornucopia of food, beautifully laid out in huge long aisles, who could possibly eat all this? We took our trollies and standing on the axles, went winging down the aisles. I was waiting for the cartoon moment when we would crash into five hundred tins of peaches, luckily that did not happen, so we loaded up with Hershey Bars, marshmallows and Dr Pepper and any other stuff that dopeheads buy, as we laughed our heads off. For a very security conscious country there didn’t seem to be a law against behaving like idiots.

The ride to Muir Beach was beautiful, but as we approached the coast the dope wore off and the clouds rolled in. I was keen to go swimming, but the others said it was too stormy and dangerous, so we ended up walking along the now slightly grey beach, admiring the craggy rocks.

When someone drops a cup and I submerge
I’m swimming in a circle
I feel I’m going down
There has to be a fool
To pla-ay my part
Someone thought of healing,
But all I really want to know
Oh won’t you – show me the way
Everyday

~ Peter Frampton – Show Me The Way

Later that night I headed over the Bay Bridge to Oakland, catching a bus so I wouldn’t be late, to see Jerry Garcia, lead guitarist of the Grateful Dead at the Keystone Berkeley. It seemed crazy to me that 2 nights before you couldn’t buy a ticket to see this man and now for a few bucks I would be standing nearly next to him. The venue was totally basic, a rectangular concrete box, with a bar at one end and a stage at the other. No windows, a few tables, and benches running along the walls, room for maybe 200 people. The band had to walk through the audience to get to the stage, now that’s a rock venue. 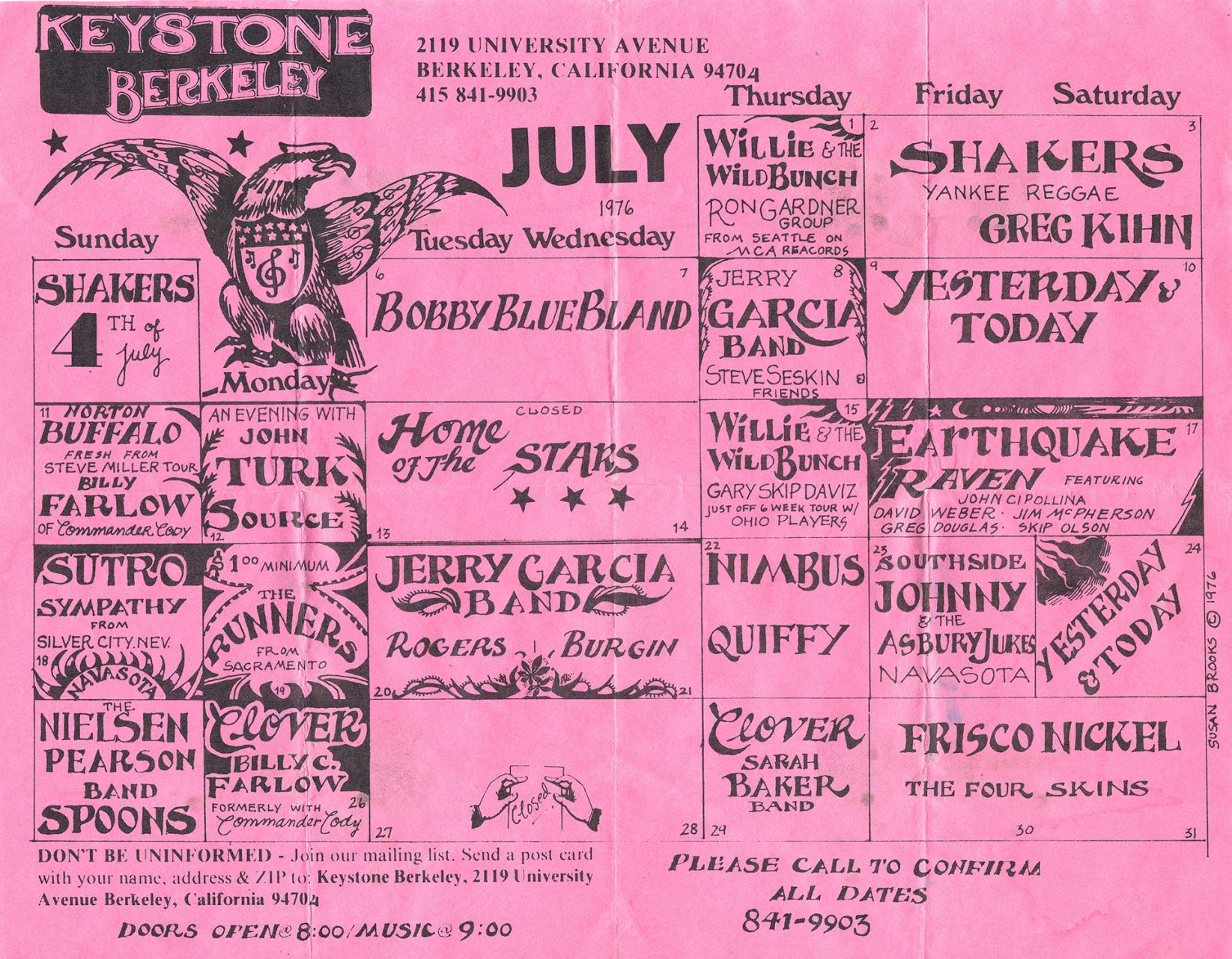 That night Jerry was playing with his mate John Kahn on bass, Ron Tutt who was the drummer for Elvis,  plus Keith and Donna Godchaux, also from the Grateful Dead, on keyboards and vocals. The second number in was the J. J. Cale song After Midnight made famous by Eric Clapton, and I knew I was in for a great night. After a bit of cod reggae with Bob Marley’s Stir It Up (rock bands hardly ever get it right), then another big favourite, The Night They Drove Old Dixie Down by The Band. I was swooning as they upped the temperature with a rockin’ version of The Way You Do The Things You Do. Time for a beer. Naturally the place was packed, with a few serious bikers and other big dudes, but it was as if we were all members of a secret club where you didn’t have to know someone to be a mate, ah, of course, we were all Deadheads. The small band was essentially playing good time bar blues, the difference being they had a world class improvising guitarist, constantly looking to spiral off into extended funky solos. And I realised I had been listening to the Grateful Dead looking for the wrong things, taken as a free jazz ensemble they were exceptional, the choogling in fact a fine mesh of ensemble interlocking rhythms, the extended numbers an excuse for Jerry to take off somewhere different every night. They are collected and revered because every set is different, improvisation is part of their raison d’être. Good live music is a spontaneous business, reflecting time, place and atmosphere, Jerry never forgot that, always keeping it loose to allow himself room. So the set continued with Mystery Train, a long train (over 15 coaches long) slowly gathering speed as Jerry precisely worked out over 12 minutes the dynamics of this journey. They finished with a joyous rocker, Ride Mighty High, just as many Grateful Dead sets do, and we spilled out into that good night sweaty and energised.

Out late again and no buses in prospect, still full of gig euphoria, I hitched back over the long double decker Bay Bridge to SF. The lights of the Bay twinkled as the golden city drew into view, we were on the top deck of the bridge, lights bouncing through the box girders, the toll had been paid and all was well. Dropped off downtown after a cool lift, I had a long walk home and then slid into my sleeping bag as silently as possible, exhausted.