So for the first three days I kept my promise and carried out some cleaning tasks, it was the least I could do. Might have been rather distracted by events after this, though. After scrubbing out the bathroom I went off to explore the local woods and was followed by the cats, then, deep in the woods, they suddenly disappeared. What are you supposed to do in such a situation? I made some desultory attempts to find them, whistling and calling, but there was no sign. I returned back to the house rather crestfallen and guilty without them. Of course, they turned up in their own good time, they probably knew their way around better than me.

In the afternoon I went picking blackberries with Régine. We got on well, she liked the fact I spoke French, which we often did. We discussed art and books, even straying onto the thorny topics of politics and religion. For my part I had to be slightly circumspect, she was erudite, engaging and funny and I had a bit of a crush on her, which was not appropriate in the circumstances. Régine, I presume, was quite unaware of this and continued embracing everyone, including me, in her effusive Gallic manner.

Charlie came back from work with his hand doubled in size due to an allergic reaction to an insect bite. It looked quite painful, but he took some painkillers and we all headed off in the pick-up to The Bowdoin, a pub and music venue in Brunswick. This was a great place with good local beer, a lively clientele and I felt at home there. I think the music venue was downstairs or maybe out the back, it was quite large and set up for small groups and singer-songwriters, with an appreciative audience sitting at tables. David would generously take me back there several more times. 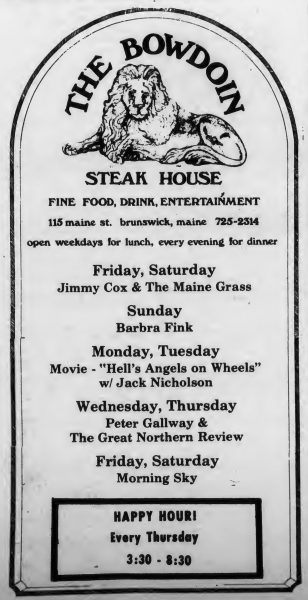