In my 20s I had smelly feet, since I rarely washed my socks. One bad practice was to leave dirty socks for a week ’til the smell dissipated, and then wear them for another week. Hence it was a red letter day when the socks were washed and it is duly noted in my diary. That morning was quiet in the apartment and I perused their record collection, slightly upset to find so many musicals (anathema for any hip UK record collector), but the great discovery was Highway 61 Revisited, recorded in 1965 by Bob Dylan. Side 1 Track 1 blasted out at full volume as I howled along, this was my story, my song.

Go to him now, he calls you, you can’t refuse
When you ain’t got nothing, you got nothing to lose
You’re invisible now, you’ve got no secrets to conceal…
How does it feel, aw how does it feel
To be on your own, with no direction home
Like a complete unknown, like a rolling stone?

The feeling of loneliness and isolation was quite exhilarating, at that moment nobody in my world knew where I was, yet I had ended up where I wanted to be. I had maybe £100, a passport and a flight from New York to Dublin, and before the days of credit cards, mobile phones and the internet that was all. I felt empty, but vindicated, living on my wits and indeed no idea how to get home. To quote Bob again from Tangled Up in Blue: “And every one of them words rang true, And glowed like burnin’ coal”. 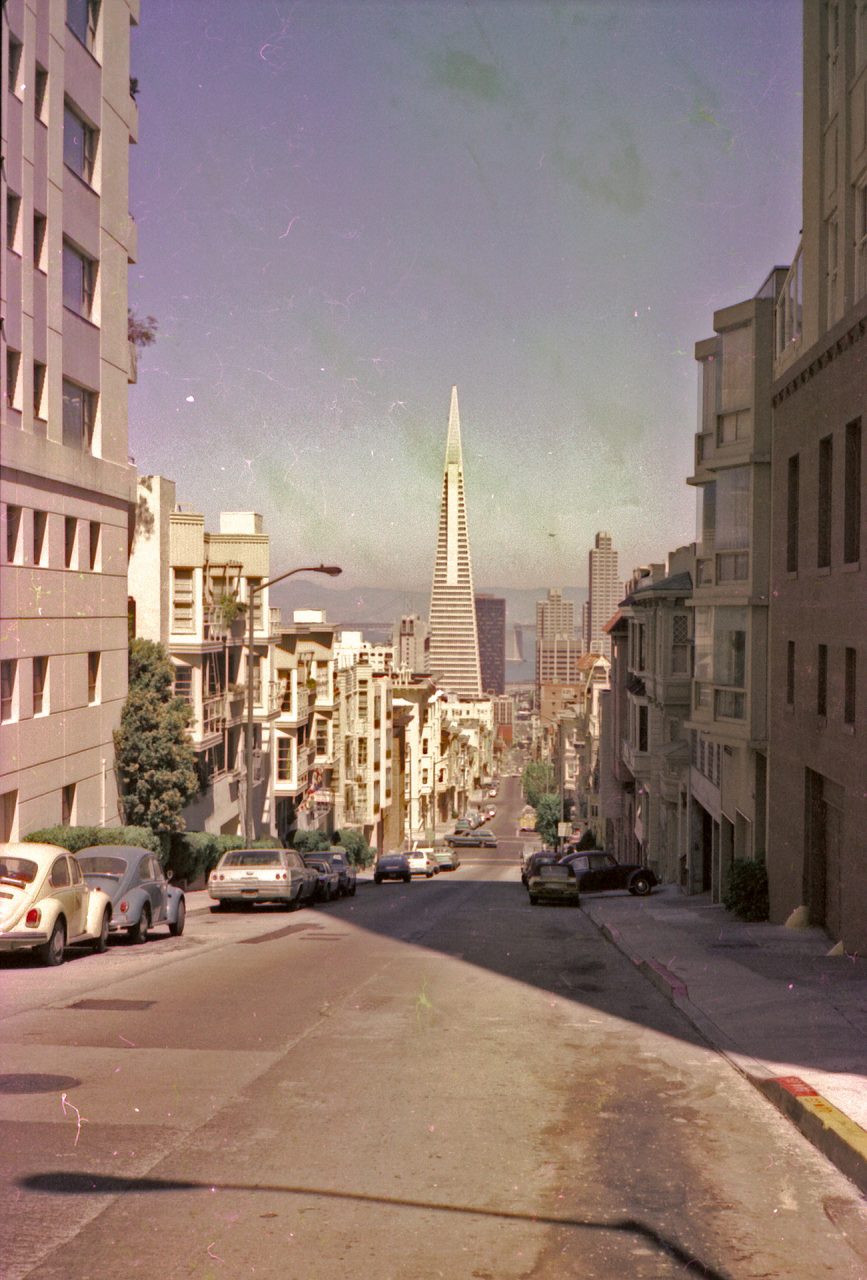 Later in the day I would have a little panic about my situation, but in the meantime I was surviving. Caught a bus downtown and walked a long way through the city, popping into the huge Grace Cathedral on Nob Hill, which reminded me of the Anglican Cathedral in Liverpool, another 20th century Gothic Revival church. On the way I took a picture of the Transamerica Pyramid from Cable Street, looking over towards the Bay Bridge. Forwards to Lombard Street, famously the most crooked street in the world with 8 hairpin bends. The big American cars looked faintly comical as they lurched down around the manicured flowerbeds, while the view from the top was impressive. Then on to the Grateful Dead shop near Fisherman’s Wharf. After seeing Jerry at the Keystone I had given in and joined the Deadheads, now I was here to buy the T Shirt. It was a blue tie-dye one which was good, but I chose the then current Steal Your Face logo and it never became a favourite; I never seemed to be in the mood to walk around with a large skull on my chest.

Walked all the way back to Sunset, a good few miles, worrying about money and my situation. I seemed to be drifting, there was no prospect of work despite Dave and Doug helping me out, my flight back was in well over a month’s time and I was on the wrong side of a continent. Action had to be taken or I wouldn’t survive. I believe I contacted my parents and somehow they sent me another £100, I have no idea how I did this and it is not mentioned in the diary. I also phoned Pan-Am about bringing my flight forward which in the end I managed to do by about 5 days, a relatively pointless exercise in the circumstances. I could only keep on keeping on.

Later that evening I went out with Dave to see Silent Movie by Mel Brooks, which had just opened. I had greatly enjoyed Blazing Saddles and Young Frankenstein, but found this to be too full of old slapstick and Hollywood in-jokes. Mel Brooks the actor was certainly no Buster Keaton or even Rowan Atkinson, shoulda stayed behind the camera. At my insistence we then went out dancing, or tried to. Since arriving in America I had not done any dancing (as in disco dancing) and felt sure this could be remedied easily in San Francisco. We ended up in the Mother Lode on Union Street, which was done up in the western saloon style and fronted a proper discotheque called enticingly Disco 2001. However this must have been the straightest disco in SF, with a smartly dressed clientele boogieing in a genteel manner to the latest polite hits. We made our apologies and left, there was to be no suitable dancing for us here. Not everything in San Francisco was bohemian, it was a normal city with nice people, a club I had yet to join.