After an excellent breakfast with the novelties of hash browns and cinnamon toast I set off back to the city to visit the National Gallery of Canada, which was then situated in a large unprepossessing building on Elgin Street. Inside however it was vast with a serious collection of masterworks, of which 2 very different pieces caught my eye. Bedroom Ensemble, made by Claes Oldenburg in 1963, is a life size garish bedroom stage set, of a type that could be found in an upmarket sleazy motel. At first glance it seems sexy but prosaic, but as the eye lingers you realise something is wrong, that the fake is itself fake and the perspective is troubling, it requires further investigation. Nothing is quite as it seems, the perspective has been exaggerated making the furniture distorted, your own eyes are now a fisheye lens, while the hard surfaces are alienating and somehow wrong, the packaging is all an illusion, soft is hard, you can’t sleep here.

Art must always play with you, pull you in until you can imagine something differently, teach you an unforeseen lesson. In 1967 Claes Oldenburg made this comment about his work: “As time goes on and the things they ‘represent’ vanish from daily use, their purely formal character will be more evident: time will undress them. Meanwhile, they are sticky with associations.”

In an entirely different register, although still dealing with desire, is the 1518 painting of Venus by Lucas Cranach the Elder. He was court painter to the Electors of Saxony in Wittenberg, Germany, and a friend of Martin Luther. This is a life size full frontal nude, brazen in its effrontery. When I saw it in 1976 her modesty was preserved by a small leaf on a twig wandering in from her left, but that did not diminish the magnetic presence before me. The leaf and several layers of posthumous varnish have now been removed during restoration.

To say this is a sexy picture draws all the wrong modern references, but that is what it is. (In a letter I reference “tits like champagne glasses”). I presume he got away with this painting because he was painting the Roman goddess of love (it was the Renaissance), not a royal or religious icon, this was his vision of a classical myth and that was now permitted. The revelation is to see his interpretation of the allure of Venus in the northern European context. Arriving out of the dark, she looks straight and slightly quizzically at you. She is rich, decorated and bejewelled, her hair in long tresses: this is not a nobody. Like the Mona Lisa there is a smile halfway between invite and disdain. It is the hands doing the seducing, casually wafting a completely diaphanous piece of silk temptingly before her. Yet as Venus she is thin, foreshortened and prim, unlike her voluptuous Italian forebears. This is a complete artistic re-interpretation of what could be regarded as classical, honest and sensual. She’s an in your face shocker up on a pedestal, this is the modern world, quick, paint that leaf.

The aforementioned letter was written to my good friend Jon for his 21st birthday. Unfortunately I could not post it until I returned to the States, being an American Aerogramme, so it was late, but the intention was there. During the course of writing Hitch 76 I have recovered this letter and I found it to be a bit of a shock, nearly incomprehensible. Now, having read it a few more times it does make sense, but fortunately only to me. It is at times plain embarrassing and unpleasant, so I will not be including it here. Still there are some apposite points raised since the opening line goes “My mind is pouring out unformed books” and later goes on “I love to talk but … to be in print seems so goddam pompous; making pronouncements of some kind” (that may be a quote from Marlon Brando). Evidently I was already thinking about books, it has just taken this long to get over the pomposity of autobiography. As the letter continues it becomes clear I had decided to make Hitch 76 a long time ago, for back then I wrote: ”I store images, sights, types and atmospheres for that first book. An alert critical faculty for all things – will it ever burst out, even be exercised?” Only now do I discover I wrote down such an ambition back then, and forty years later here it is, not quite bursting out but managing to walk up and down the page. If then could see me now, life would hopefully feel better, as the passage bitterly concludes: “All I have is amorphous, meaningless but to me, for I have no tangible gift”.

Ok, I partially relent, the end of the letter is relatively sane and simply describes some of the events from my trip, which if you have read Hitch 76 you will already know about. Regard it as a little unreadable resumé of the story so far. 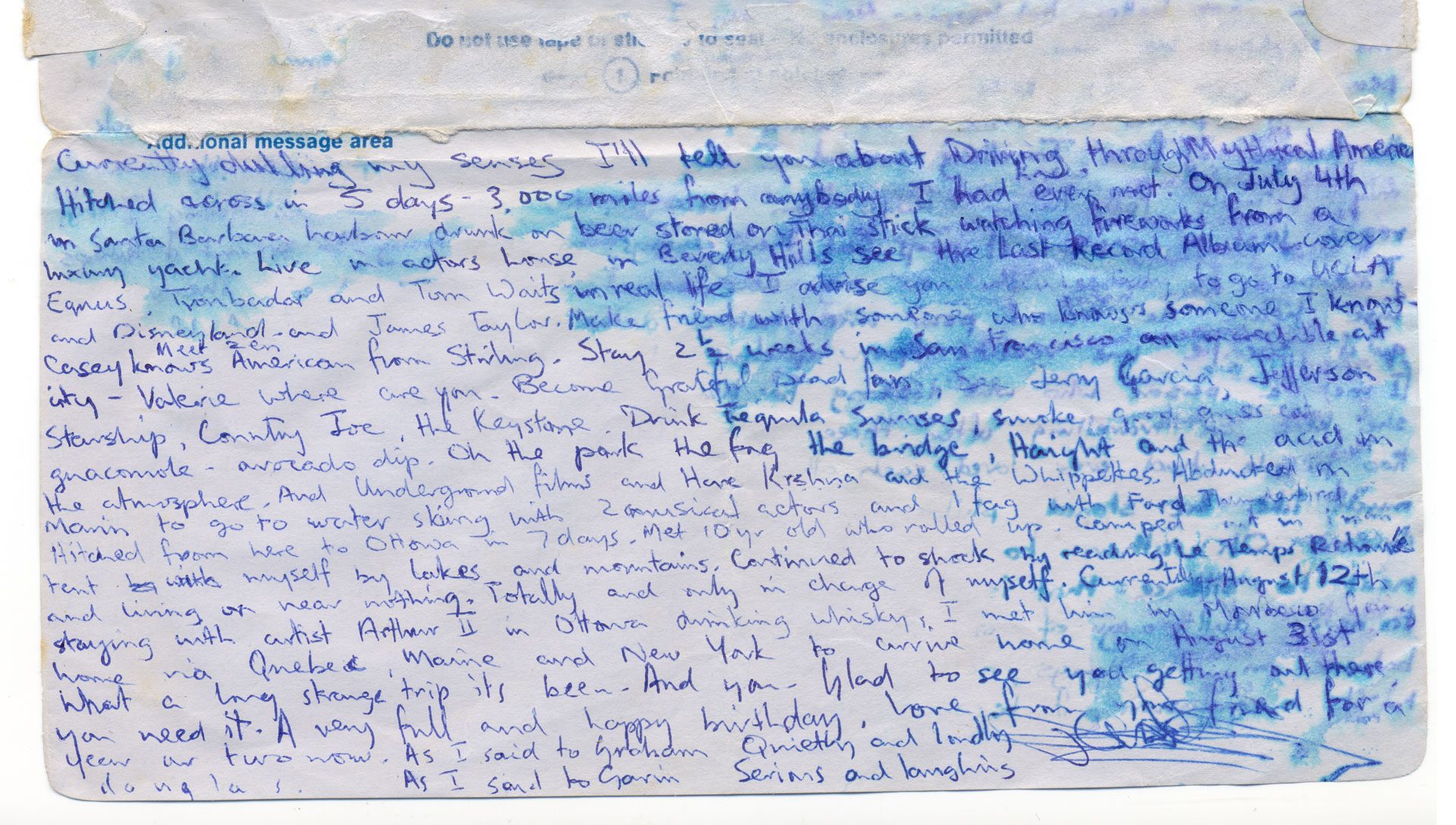