As I walked out one midsummer morning determined to hitch up Highway 1, the sky was blue, the little ranch houses nestled as the sea lapped on the rocks. This stretch at the beginning of Highway 1, just out of Santa Monica after you pass the Getty Villa, resonates with me. It is full of broken romance and a relaxed seediness. You are close to the sprawl that is LA, but already the frantic dynamism has dissipated. Slowly the sand gives out to be replaced by a rocky grandeur, you are on the Pacific Coast Highway, a few yards from the sea. I want to visit every bar, the legendary places like Topanga Canyon, Zuma Beach, anywhere called Malibu.

Puttering along, getting little local lifts, then a lift from a young guy my age and we start talking. Within 10 minutes an extraordinary thing happens, we have met before! We had both been at a party at the University of Stirling, he was on an exchange programme there, and we know several people in common. He invites me to his house nearby and we veer straight off the Highway down a very steep track arriving at the most bizarre house I have ever seen, called Sandcastle. I am feeling slightly guilty since I haven’t hitched very far, this feeling soon wears off as I realise I am in Malibu heaven.

The house seems to be made of driftwood and is indeed shaped like a sandcastle, all circular then someone got a bucket and stuck it on top. A curved balcony opens right out onto the beach, and there the waves are crashing invitingly. On entering into this fairytale house, the first thing that strikes me is their fridge covered by childish drawings and the word Zen. I had been wanting to meet some Californian buddhists, and perhaps this was a new sect using primitive drawing as a kind of therapy. Inside, the house was indeed round, with a huge fireplace in the middle, like a giant tepee, and round the edges were a variety of nooks filled with art, books and fascinating ephemera.

In the late afternoon we go for a swim, seals are basking on the rocks in the little bay, and they proceed to slope off the rocks and come and swim with us. They seem as interested in us as I am in them. It is a real pleasure to swim with a wild animal for the first time and there is no fear, only fascination. Then I am welcomed into the family home with home made hamburgers cooked on their outdoor barbecue, Schlitz beer (that made Milwaukee famous) and jazz playing in the background. A splendid evening ensued discussing Thomas Pynchon and J. D. Salinger. I unrolled my sleeping bag and slept on the floor, thinking of Raise High the Roof Beam, Carpenters. 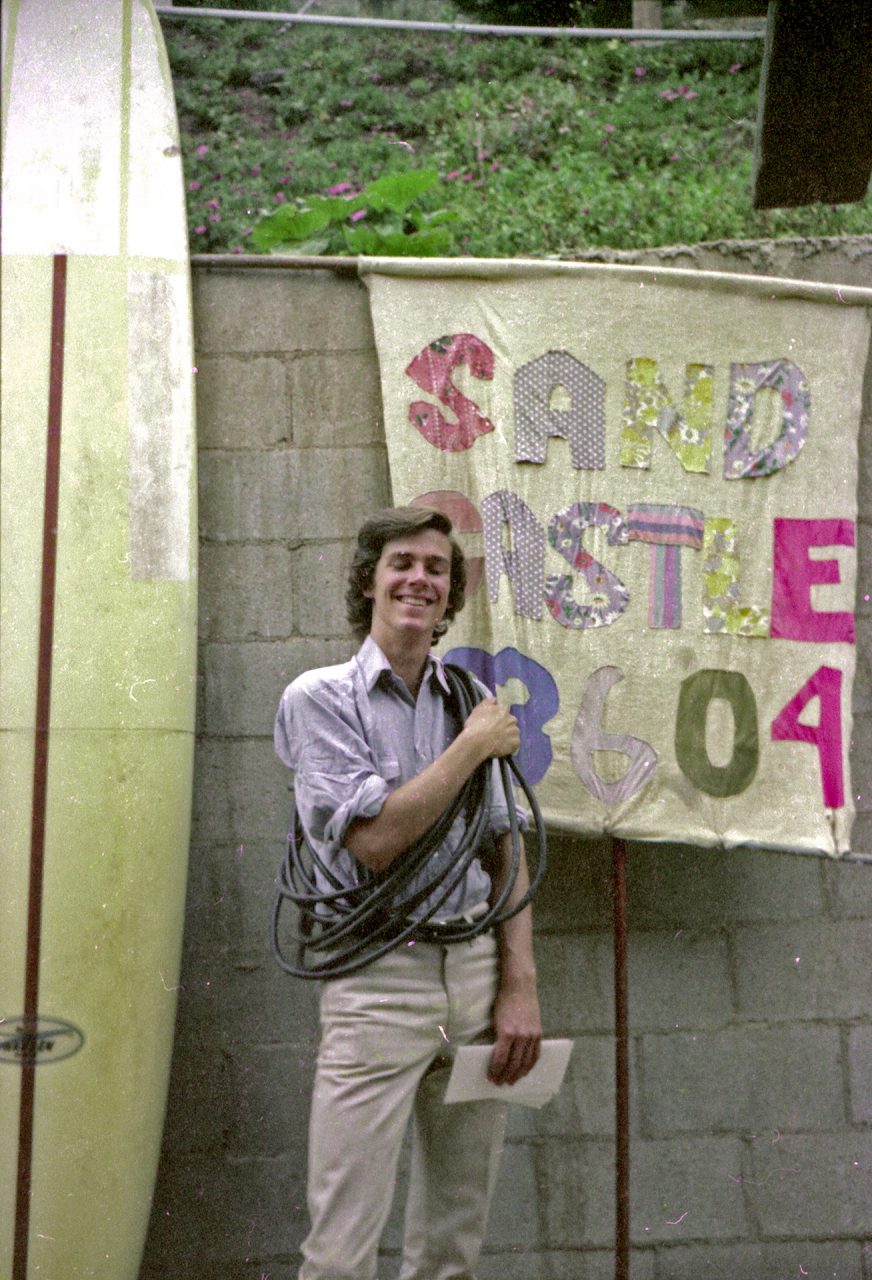 My friend was Casey Dolan, an aspiring writer, who went on to work at the Los Angeles Times. At the time he was the first person I’d met who said they were actually writing a novel, he impressed me with his ambition at this young age. A novel seemed like a mountain that was rarely climbed, far away and forbidding, only opening its secrets up to very serious and dedicated people. And of course many more novels are started than are finished, it’s hard to keep inventing. Casey and I kept in touch for a few years and exchanged postcards, but he only got as close as Dublin, to my knowledge. I now know how famous the rest of his family are, though at the time that wasn’t so important to me. His charming and gorgeous mother, Nan Martin, was a major Hollywood star from the 50s onwards, while it was his stepfather Harry Gesner who built Sandcastle and many other dramatic and sculptural buildings in California. Also present was their other young son, Zen Gesner, whose name had so confused me on my arrival. He is now a Hollywood actor, famous for playing Sinbad and appearing in Dumb and Dumber.

A year later my hitchhiking buddy Pete dropped by, on my advice, and went surfing with Harry Gesner. They sure were warm-hearted people.