When I awoke it was early and I was freezing, but my rucksack was safe and all was well. I took out my camera and snapped a photo to commemorate a night of real wild camping. 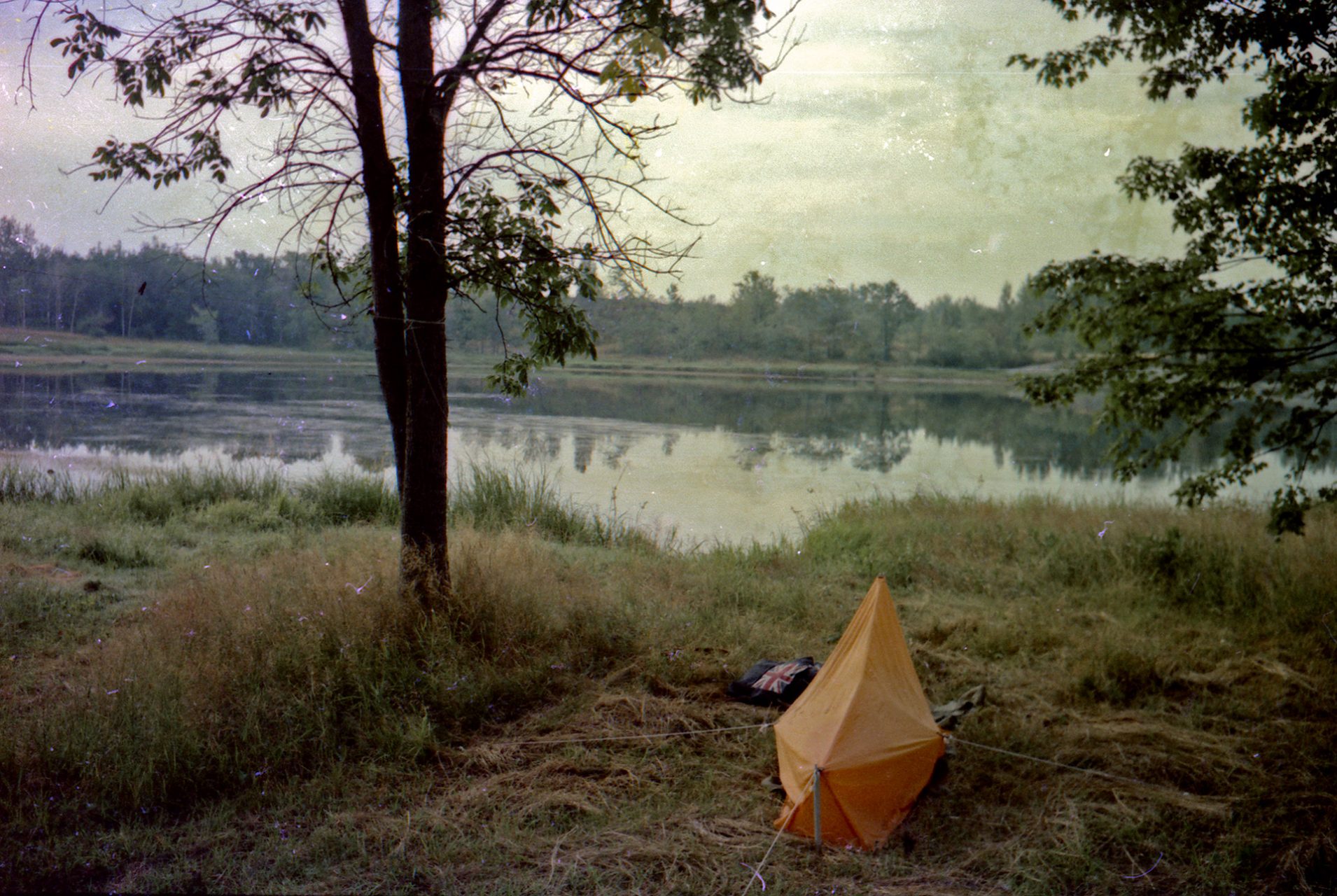 Went back to the highway, vehicles still dormant, but eventually got a rare lift from a young guy on his way to work. He generously offered me one of his peanut butter and jam sandwiches, so I tucked in. When I told him I had been camping out in the woods he looked at me askance and then I said I thought I was going to be burgled in the night. He looked again harder and said it was a bear, a black bear, don’t camp out there. The thought had crossed my mind, I had dismissed it as too melodramatic, but apparently they were common here and nocturnal. Of course it was a bear and it was fortunate I had no food in my backpack or tent, that’s what they’re looking for, he said. Ah dear, it was amateur hour for wild campers, later on I would see several signs warning about the bears, I had only foreseen skunks. To put me at my ease after this revelation he played an 8 track cartridge version of Neil Young’s Harvest, so we bonded over one of Canada’s finest musicians, as I sang along softly, I knew all the words and so did he.

After a long long wait was finally picked up by Ron, an aircraft engineer with a big fast car. A well-educated and smart man in his 50s, he started teaching me about the fishing in the lakes we were speeding past, which I knew nothing about, but we soon moved onto more general topics and I surprised him with my general knowledge. Soon we were setting quiz questions for each other, trying to catch each other out.

The quiz petered out, the beautiful Lake Superior disappeared behind low cloud as dusk fell and I dozed off. I flickered in and out of consciousness as the car sailed through the long graceful curves around the lake, and a light grey rain fell. I awoke with a start to see a nightmare scenario, we were speeding round a long sinuous curve in the wrong inside lane. Coming the other way was a car, headlights on, heading straight for us. I could shout now and perhaps avoid an accident, no there wasn’t time, what was the point? So this is it, death by silence, death without fear? Where’s that moment where your life flashes before your eyes? I was at peace so nothing flashed before my eyes. There will be no panic.

As the oncoming car sped by us on the inside I sat stock still, I had seen my ghost and imagined death, not so good. I froze. I exhaled.

Ah what – we are on a three lane road – I am so stupid. We had been travelling in the middle overtaking lane of a three lane road, I hadn’t noticed the other lane in the dark and the curve had made the other car appear to be heading towards us. I had been killed by an optical illusion. I recovered slowly, trying to calculate the output of the scenario. Had I been chicken? If I thought we were going to crash, shouldn’t I have done something? Was it good to look death in the eye? How stupid is stupid? Is there any such thing as fear? Eventually I stumbled out a dry comment about the danger of three lane roads and that they were trying to ban them in the UK, just to say something, to get back to reality and make myself feel better. Ron didn’t notice a thing, he just kept driving. Nothing had happened.

We headed on past Sault Ste. Marie at the American border to Lake Huron and I asked Ron to drop me before the next big town, Sudbury. With a slight miscalculation I ended up on the outskirts of town at an abandoned camping ground and discovered not everywhere by the Vermilion River is pleasant, it was dusty, grey and grimy, but I bedded down. I presumed there would be no bears there.